Anyone who has ever read a book by John Piper will know two things right off the bat. First, he is incredibly passionate about what he does. I have never heard him say this, nor read these words from him, but I can imagine that his mindset is that if he is going to invest his time into doing something, he is going to give it everything that he has. Second, the man is thorough. I want to qualify that wording just a little bit. When I suggest that Piper is thorough, I do not want you to think that he is exhaustive (or exhausting!) nor do I want you to think of thorough as being tediously boring. When I suggest that John Piper is thorough, I am stating that he does not gloss over the subject matter or approach it haphazardly. You will walk away from his writing with a full understanding of what he intended to say and why he said it.

This brings us to the one missions book on our list for this summer. Let the Nations Be Glad! is in its third edition, highlighting the significant role this book has played in the hearts and minds of many followers of Christ in how we reach the nations. One of the aspects of this writing on missions that has very much shaped me is its appeal to worship. As you may be aware, I am big on worship. Not just the music or song, but the awe of who God is. Piper says it this way: “Missions is not the ultimate goal of the church. Worship is. Missions exists because worship doesn’t. Worship is ultimate, not missions, because God is ultimate, not man…worship, therefore, is the fuel and goal of missions.”[1] Think about the focus we often take when it comes to missions, whether short term to Baltimore or overseas or something that will be a long term engagement. Most of the time we say the right things and embark on these endeavors for the right reasons without understanding the right undercurrent of missions. We want to strengthen church plants and we want to reach nations, but why? We understand the Great Commission to go, but why? 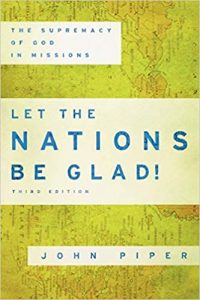 Missions naturally stems from a passion and a zeal for God. We go to the nations because we love God and we want others to love Him and to serve Him. That is worship! Let’s walk through the scenarios for engaging in missions. Sometimes it is because there is a church trip and we feel that we ought to go because “it’s the right thing to do”. Other times, the destination is what draws us. I mean, who doesn’t want to go on a mission trip to Grand Cayman? I know we could fill up two church buses with youth to go on a beach mission trip. But, the heart of missions stems from a desire to see God’s name glorified among others, whether it is another nation or another city. This is where worship drives missions.

It also calls us to evaluate the way we approach our passion for God and godliness. As Piper says in this book, “You can’t commend what you don’t cherish. Missionaries will never call out, ‘Let the nations be glad!’ if the cannot say from the heart, ‘I rejoice in the Lord…I will be glad and exult in you, I will sing praise to your name, O Most High’ (Psalm 104.34; 9.2)…Where passion for missions is weak, zeal for missions will be weak. Churches that are not centered on the exaltation of the majesty and beauty of God will scarcely kindle a fervent desire to ‘declare His glory among the nations’ (Psalm 96.3). Even outsiders feel the disparity between the boldness of our claim upon the nations and the blandness of our engagement with God.”[2] Let me also suggest from Piper’s claim we can draw inferences as to why the church in America is also seeing a drastic drop in conversions and baptisms. We have lost our sense of awe when it comes to God. This is not a millennial problem or a boomer problem. This is a church problem. If we are not enamored with the glory of God, we will not engage our culture with the hope we claim to have. They can see the disparity between what we say we believe and how we go about life in that belief.

His second major point about missions concerns prayer. Now, we have had two other books on prayer in our discussion this summer. You can catch up on those recommendations here and here. Piper takes a slightly different approach that does not at all disqualify what Hybels and Keller have said in the previous books. But, remember, Piper is an extremely passionate man and he rightfully understands that our prayer lives are to be shaped more by what God is doing than what we “want”. Using the spiritual warfare that ensnares all of us as the framework for his argument, Piper states, “Prayer is primarily a wartime walkie-talkie for the mission of the church as it advances against the powers of darkness and unbelief. It is not surprising that prayer malfunctions when we try to make it a domestic intercom to call upstairs for more comforts in the den…Prayer gives us the significance of frontline forces and gives God the glory of a limitless Provider…prayer safeguards the supremacy of God in missions while linking us with endless grace for every need.”[3] This approach and view of prayer takes seriously the Lord’s prayer statements of “Your Kingdom come, Your will be done” as we are emissaries of the King to disperse His glory.

In our day to day lives, we are prone to consider prayer in the former, as a way to acquire the comforts of life. This is not a mindset of war, but of peace. In Piper’s words, “Virtually every ‘civilian’ blessing in the Christian life is conscripted for the war. There is not a warfare part of life and a no-warfare part. Life is war. But most people do not believe this in their heart. Most people show by their priorities and their casual approach to spiritual things that we are in peacetime, not wartime.”[4] Look at the headlines in recent news around our country. A 5 year old boy shot in his front yard for riding a bike on the neighbor’s grass, a heroin bust in Atlanta that is the biggest in GA history, GA court official arrested on child pornography charges…the list can go on and on, at every point articulating that there is something dreadfully wrong in our world. Steven Tyler said in 1993, “ There’s something wrong with the world today, I don’t know what it is. There’s something wrong with our eyes. We’re seeing things in a different way and God knows it ain’t His. It sure ain’t no surprise.”[5] If a secular rock band could see that something is wrong, where is the church to provide the answer?!? The truth is we are in a spiritual war and our God has deployed us to draw others to worship Him!

This is why we do missions. We exalt the greatness of our God in a way that pushes us forward. We know that the Gospel is for salvation, but when we come to grips with the fullness of the majesty and beauty of our God we can see clearly how wonderful it is that He provided the blood of Christ as a means for us to know and worship Him! This is why we beckon the nations to come to Christ. Thinking about Paul in Acts 17, Piper observes, “Paul does not reveal to the worshipers in Athens that they are already prepared to meet their Judge because they render a kind of worship to the true God through their altar to the unknown God (Acts 17.23). They are not ready. They must repent.”[6] The same for the man at RaceWay on 74 and the lady in your neighborhood. It is true for the family in Baltimore as well as the merchant in Nepal. Idolatry is rampant in our world and we know that only Christ can save. What prevents us from getting this message out?

See, this book is going to ask you questions that we have assumed the answers to in our churches for generations. True confession: in rereading this book this week, I have been convicted again in how I have personally let worship and prayer fall to the wayside of personal practice. It is through our zeal for the Lord God and His great name that. As we run toward the finish line of 2020, let us regather a  passion for God that forces us out into the watching world!

This book can be found on Amazon: https://tinyurl.com/yyl5otam 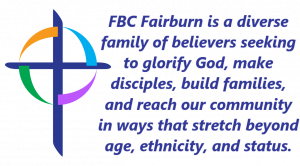